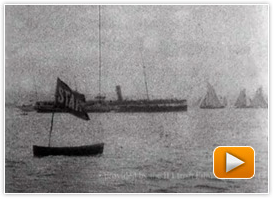 As part of the research for “G L Watson – the Art and Science of Yacht Design”, yachting historian and co-editor Iain McAllister discovered this amazing film clip from the Golden Age of Yachting.

The year is 1899, the date is July 8th, and the time is exactly 10.30. It is the start of the “Big Class” in the Royal Clyde Yacht Club Regatta at Hunter’s Quay, in Scotland’s Firth of Clyde. There are just three starters, the huge “cruising” schooners Rainbow and Gleniffer, and the “out and out” racing cutter Bona.

The filmmaker is Robert Mitchell of Belfast. He sets the scene by panning from the small boat showing a flag “Start” to a rowing boat with two men on board. One stands, probably holding a box camera, then sits to take a few strokes on the oars to avoid—-the immense bowsprit of Bona, followed by the black hulled Rainbow, struggling to set her main topmast staysail. From the bobbing of the rowing boat in the wake of these giant yachts, we can see how close they were. But they were the right side of the start so not in danger. Mitchell knew what was coming and by focussing on the rowing boat, he delivers scale and drama to this short film.

Mitchell follows the yachts briefly and we see the “club steamer” (most probably the Caledonian Steam Packet Co.’s Duchess of Hamilton) with spectators moving off to follow the 52 mile race. We also see the cameraman standing up again, presumably to catch the late starter, Gleniffer, the largest sailing yacht in the world, and slow to manoeuvre for the start.

This clip was discovered in the Irish Film Institute in Dublin where, as is so often the case with historic photographs and film material, it was incorrectly captioned. It was believed to be the oldest surviving film ever made in Ireland. Now we know it was by an Irish filmmaker, but a scene captured in Scotland. It is believed to be unique, maybe the only film clip of yachts racing in the 19th century.

It is not surprising that these spectacular yachts were often photographed. Apart from the odd sailing ship, commercial steamers and trains, they must have been the largest non-commercial moving objects of their time. (Sailing ships would rarely carry full sail so close to the shore.)

All three yachts were designed by the great Scottish naval architect G.L. Watson, and indeed he put up a special trophy for schooners only.

The description of the race in the July 13th issue of “The Yachtsman” tells it as we now see it:

“The weather was charming, sunny, warm and clear; the [west] wind light and the sea smooth. Bona’s start was timed to a tick, and Rainbow, which was in a good berth to leeward of her got off nicely too. Glenniffer, less easy to move in the sheltered Loch, was nearly a couple of minutes behind Rainbow in getting over the line.”

Of course Bona won the race, the schooners were both primarily cruising craft, but Rainbow was so fast that she started a whole new fashion for schooner racing. The Kaiser had given up racing his Meteor II, also a Watson design, because the time allowance at the time favoured the slightly smaller cutter Bona, which was Champion of both 1897 and 1898. Then he switched to schooner racing, and this led to the superb big Herreshoff and Nicholson schooners of the early 20th century.

For more background on the yachts, their extraordinary dimensions, their colourful owners and of course the man who designed them, G.L. Watson, see Chapter 19, pages 309 to 325 of G L Watson – the Art and Science of Yacht Design.